Wales’ newest city is buzzing with hopes of a revival after Hollywood A-listers Ryan Reynolds and Rob McElhenney bought their football club last year – putting Wrexham and its once struggling club firmly back in the spotlight.

Wrexham AFC has never enjoyed such fame since Mickey Thomas’s famous goal in the FA Cup upset against Arsenal in 1992 and a series of high profile games this summer has filled supporters with pride.

Locals say there is a renewed optimism in the north Wales city, where fans have endured years of disappointment and the two star owners themselves have warmed to the community.

Now, a new documentary Welcome to Wrexham showcases the city in all its hope and glory.

Local group The Declan Swans, a three-strong band, appeared in the film with a song ‘It’s always sunny in Wrexham’ – a nod to McElhenney’s famous television show.

Guitarist Mark Jones, 55, said: ‘We can’t believe what’s happened. We met them in October and talked about this song. They’re nice down-to-earth people. 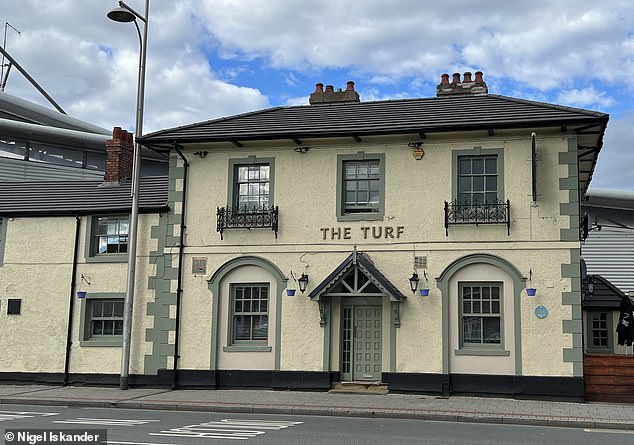 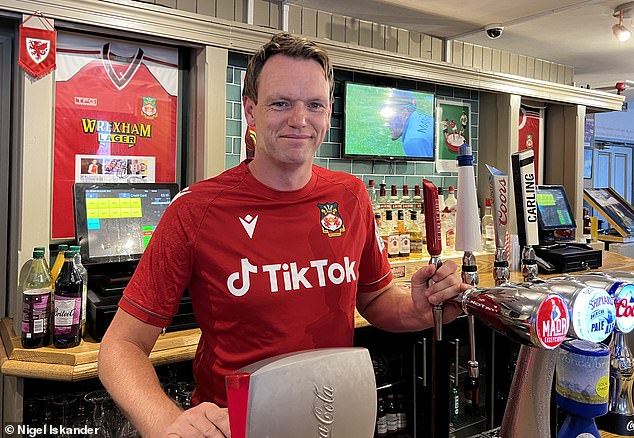 Landlord Wayne Jones, 40, runs the Turf pub in the building where Wrexham AFC was founded

‘People used to walk around mainly in Liverpool and Manchester City or United tops.

‘Now everyone wears Wrexham tops with pride. It’s gone crazy in the space of two years.’

Dave Pinder, 42, sitting at the Turf pub, located next to the ground, said: ‘There’s been a massive difference locally. Fans are more upbeat and look forward to the games.

You see more Wrexham shirts now. I feel they are in it for the long haul, they have put a lot of investment into the club. Even if they left tomorrow they have done a lot with the structure of the club and the people of the town.

‘I have seen a lot more Americans and Canadians here. They come in the pub.’

Mr Pinder is a season ticket holder and a fan of the club since 1990.

He added: ‘The interest is a lot more now. You have to get a ticket two weeks in advance it’s always busy here now.’ 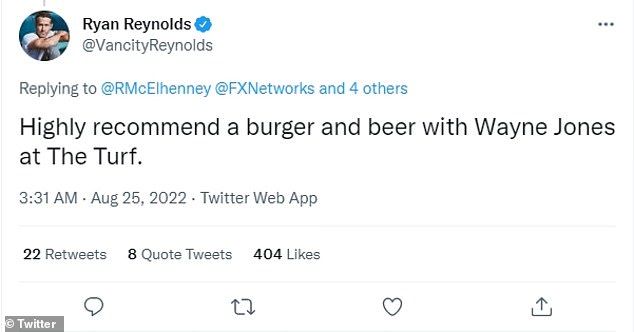 The celebrity owners have been entertained by the Wrexham landlord a number of times, with Reynolds recommending the pub to his 20 million followers 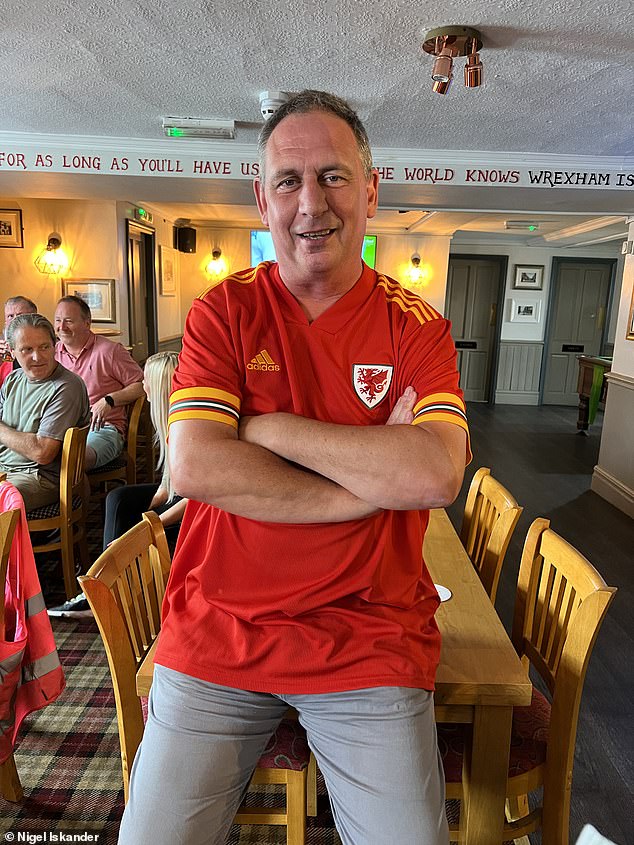 Guitarist Mark Jones, 55, who plays with local band The Declan Swans, said: ‘We can’t believe what’s happened. We met [Reynolds and McElhinney] in October and talked about this song. They’re nice, down-to-earth people’ 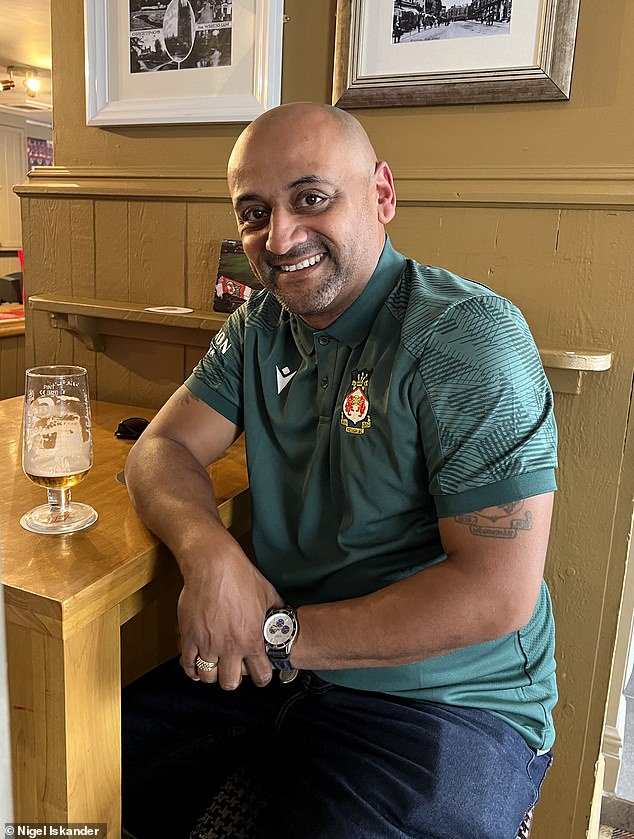 Dave Pinder, 42, sitting at the Turf pub, located next to the ground, said: ‘There’s been a massive difference locally. Fans are more upbeat and look forward to the games.

Andy Cronshaw, 42, a businessman, said: ‘Wrexham tops are selling all the time. I hope the club’s success will change the town.’

Wayne Jones, 40, Turf landlord and a new ‘star’ of the documentary said: ‘Our main aim was to get Wrexham on the map.

‘Since they have taken over the crowds have doubled and our business has doubled.’

‘I have never met so many North Americans wanting to see if Ryan is in the pub.

‘There have been people from Illinois and Vancouver who have traveled here to see Ryan’s club.

‘Ryan and Rob are lovely guys. They are very down to earth, they need their feet on the ground in a place like Wrexham. They are very humble and have donated countless amounts of money to children.

‘I think they genuinely want to see a difference in the community.’

The Wrexham fan added: ‘We’ve had many false dawns before.

‘They have come in with a plan and they’ve taken it forward, they have done what they promised to do. They have endeared themselves to the community. We have great hopes for the future.

‘I lost a little bit of hope in fan ownership. As noble as it is, it only takes you certain levels.’ 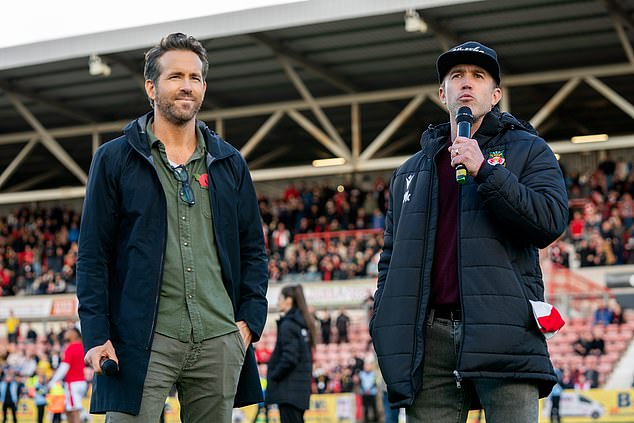 The Turf is open 365 days a year including Christmas and holidays, and only pandemic shut down because of the Covid-19.

Mr Jones loves his local club as much as his pub and has been one of its most devoted supporters since visiting the Turf as a child.

He said in the documentary: ‘On a match day we would be absolutely chocker, the bar is always five or six deep.

‘My parents were regulars here and I remember coming to this pub after the match and they’ve won. The jukebox is blaring, and people are singing and people are happy, and from that minute on I was absolutely hooked.’

It comes days after A-lister Reynolds boldly claimed that a curry house in a small Cheshire town had the ‘best Indian food in Europe’ to his 44m Instagram followers.

The Wrexham co-owner hailed the Light of India Balti House in Ellesmere Port and posted a picture of the restaurant’s flyer on his Instagram story on Saturday night.

Wayne spoke of his passion for the club, which started when his parents brought him to the Turf as a child

The series has received almost universal praise following the first two episodes being made available to view online. The Turf features heavily, showing fans taking in a vital game on TV at the iconic venue located behind the Mold Road Stand.

Wayne Jones, long-time landlord of the Turf and lifelong Wrexham AFC supporter said: ‘We’re having a gathering at the pub tonight to watch it. I was going to watch it at home and hide under the duvet but I’ve been talking into watching it here.’

‘It’s been brilliant. Everyone is walking around with a smile on their face and the town is booming at the moment.’

Wrexham AFC are next in action on Saturday when they face Woking away.

The club’s next home game is against Gateshead on Tuesday night and it is expected that the Turf will once again be at capacity, with the pub solidifying it’s reputation as the number one watering hole for Dragons supporters.