The European Central Bank’s sense of urgency in tackling inflation has overtaken concerns over the damage an aggressive rate increase that would inflict to the eurozone economy ahead of a policy meeting this week.

Several ECB rate-setters have said they are focusing more on current record levels of inflation to decide policy, moving away from an earlier, more dovish approach that hinged mostly on where they expected prices to be two years from now.

The shift has led many economists to forecast a 0.75 percentage point rise on Thursday for only the second time in the central bank’s history — a move that would leave the benchmark deposit rate at 0.75 per cent.

“There are no doves left at the ECBonly average hawks and uber-hawks,” said Katharina Utermöhl, senior European economist at German insurer Allianz.

The ECB surpassed expectations in July by raising its deposit rate by 0.5 percentage points to its current level of zero, the first increase in more than a decade — and a bigger rise than the president Christine Lagarde and its chief economist Philip Lane had flagged.

The latest hawkish shift has been led by Isabel Schnabel, an executive board member, who emphasized at the Jackson Hole gathering of central bankers a week ago that the bank would be willing to raise borrowing costs to a level that would lead to higher unemployment and possibly recession to fight inflation.

“The ECB president hasn’t spoken [on monetary policy] for six weeks — it would have been good to hear from her,” said Piet Haines Christiansen, chief strategist at Danske Bank. “She is more inclusive and doesn’t make up her mind until she has heard everyone else speak . . . But that puts her at risk of markets boxing the ECB into a corner in the meantime.”

Jürgen Stark, a hawkish German economist and former ECB executive, asked in a letter to the Frankfurter Allgemeine Zeitung newspaper why Schnabel was delivering the key Jackson Hole speech and not Lagarde or Lane, suggesting there could be a “reallocation of responsibilities” on the bank’s board.

Lane has continued to caution against the dangers of raising rates too aggressively. He told an event in Barcelona last week that there were “no shortcuts” to analyze the inflation cycle and he was confident inflation would soon fall from its “extremely high levels”.

The ECB said Lagarde had been in “constant contact” with the 11 of its council members who were at Jackson Hole and pointed out that its president had not always attended previously.

As well as raising rates on Thursday, the 25 members of the ECB governing council are expected to discuss ways of pushing up banks’ financing costs.

Policymakers want to restrict commercial banks from earning billions of euros in interest on some €4.5tn in deposits placed at the central bank. The ECB granted €2.2tn of subsidized loans at rates as low as minus 1 per cent during the coronavirus pandemic to encourage banks to keep lending, but now that rates are rising this could generate more than €20bn for the private sector, which is politically Unpalatable and contradicts efforts to tackle inflation.

Some policymakers have even floated the idea of ​​the ECB starting to shrink its almost €9tn balance sheet by reducing the amount of money it reinvests from maturing bonds in its €5tn securities portfolio. But this looks unlikely to be decided before October or December.

Sven Jari Stehn, chief European economist at Goldman Sachs, said the “important shift” challenged expectations the ECB would halt rate rises should the eurozone fall into recession, as he and several analysts expected.

Stehn highlighted that inflation would hit double figures before the end of the year, which would force the ECB to raise the deposit rate to 1.75 per cent by 2023.

Calls for the ECB to join the US Federal Reserve in raising rates more aggressively were bolstered by eurozone data showing inflation surged to a record high of 9.1 per cent in August, while unemployment hit a record low of 6.6 per cent.

But even before this, several factors were pushing rate-setters in a more hawkish direction.

Wholesale energy prices soared to all-time highs in Europe last month on fears Russia would keep throttling gas supplies. While they have retreated in recent days, German power prices on Friday were still about 10 times higher than a year ago. Growth has been resilient despite the energy crisis, helped by supportive fiscal policy and the lifting of coronavirus restrictions.

Meanwhile, the euro has fallen to near par with the dollar — pushing up inflation further through higher prices of imports, especially energy.

Another element behind the shift is that, after underestimating inflation for a year, many ECB rate-setters are losing confidence in the models they rely on to forecast where prices are heading. Because the impact of monetary policy decisions takes at least 18 months to affect the economy, those models previously provided the reference point for decision-making.

“It was more or less impossible in our models to produce any inflation that would not be temporary,” Belgium central bank governor Pierre Wunsch, an ECB council member, said last week, adding that they always showed price rises falling to the 2 cent target, regardless of the assumptions. “We have come to the conclusion that we know much less about inflation drivers than we thought.” 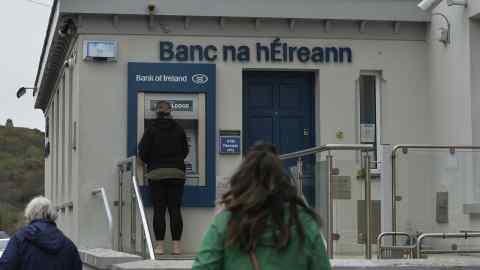 Inflation is so high that, as Schnabel outlined in Jackson Hole, it risked becoming “an important reference point” for where consumers and businesses expect price pressures to be.