When four magnificent horses of the Royal Canadian Mounted Police take the first steps of the Queen’s funeral process tomorrow, it will mark the culmination of a 53-year love affair between the late Monarch and the ‘Mounties’.

Ridden by officers wearing the famous red tunics and stetsons, the four horses will lead the extraordinary ceremonial parade from Westminster Abbey to Hyde Park Corner.

Fittingly, one of the quartet is named Elizabeth (after the Queen Mother) and was given to the Queen as a gift in 2012.

Elizabeth, aged 17, will parade alongside George, a 22-year-old horse that has been ridden by King Charles at Trooping The Color ceremonies since 2009, and Sir John, a 14-year-old charger currently ridden by Princess Anne.

The final member of the foursome, aged 16, is called Darby and has toured the world with the Musical Ride – a spectacular display team consisting of 32 horses bearing riders with 7ft lances, performing intricate manoeuvres.

The horses will be ridden at the procession by Superintendent Kevin Fahey, Sergeant Major Scott Williamson, Corporal Justine Rogawski and Constable Katy Loisel.

Their trained police steeds are expected to cope well with the crowds likely to be packing the route along Whitehall and The Mall.

Sgt Major Williamson, who will be riding Darby tomorrow, last night said it was ‘incredibly humbling’ to be given the honor of leading the funeral procession.

‘The relationship that we have with Her Majesty is very special and it’s fair to say it’s even become quite personal.

‘It’s hard to describe everything that I am feeling right now. I have the personal emotions of sadness and grief. Obviously there is a lot of pressure right now.

‘We are in what we would call a “no fail mission” right now, and that is to represent the force and the great people of this country during this ceremony.’

The Queen’s deep affection for the RCMP began when the Mounties presented her with a horse called Burmese as a gift in 1969.

The stunning black mare quickly became one of Queen Elizabeth’s favorite horses, which she rode at Trooping The Color for 18 years between 1969 and 1986. 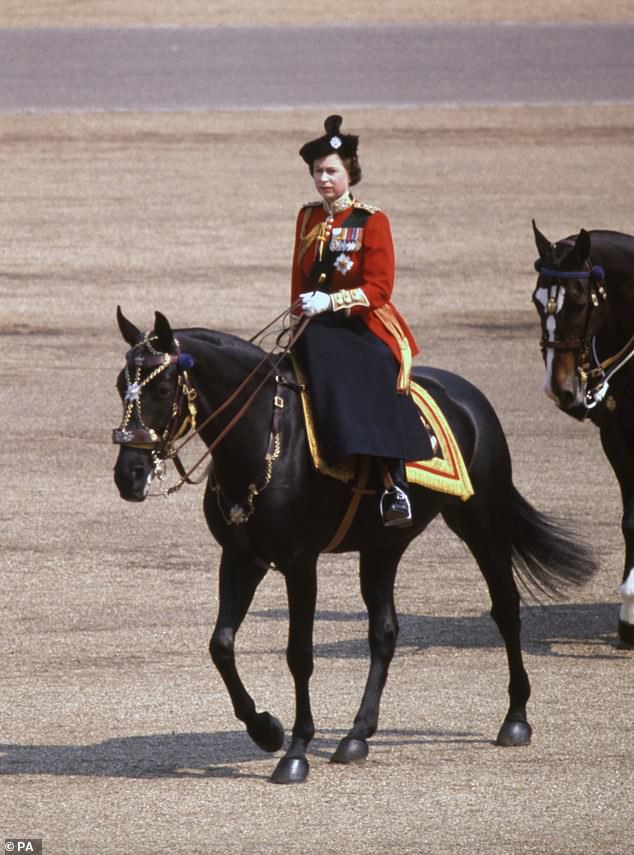 Burmese came to public prominence in 1981, when a teenager at the ceremony fired six blanks from a gun.

Although Burmese initially shed and cantered forward, the Queen, an accomplished rider, quickly regained control, to cheers from the crowd.

The following year, Queen Elizabeth was pictured on Burmese during a ride with US President Ronald Reagan in Windsor.

When her beloved horse retired in 1986, the Queen declined to ride a replacement and opted to take part in the parade from a carriage.

Burmese, meanwhile, enjoyed a pampered retirement at Windsor Castle and was put out to pasture in fields where the Queen could see her on her visits. Burmese died in 1990 aged 28 and was buried in the grounds of Windsor.

‘She rode Burmese for 18 Trooping The Color and that was the beginning of a special relationship that we created with Her Majesty,’ Sgt Major Williamson added.

At 16 hands tall and with a calm temperament, the mare Elizabeth appeared to have captured the Queen’s heart in recent years in the way Burmese once did.

After receiving the horse as a gift, Her Majesty pledged to return the RCMP’s generosity by breeding it and returning them its first foal. 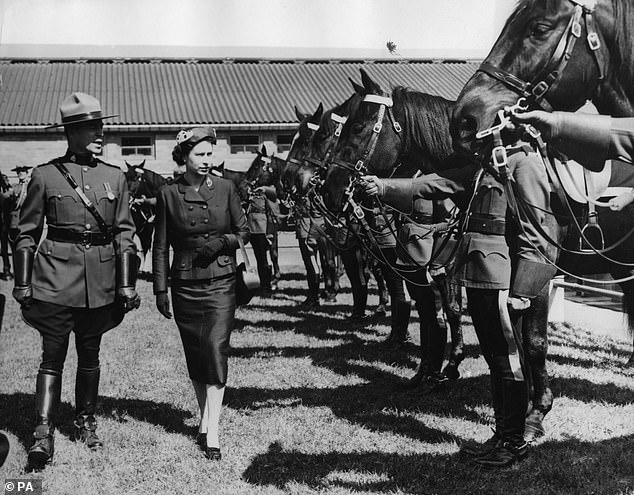 The subsequent foal, called Victoria, made history in 2016 when it was the first non-thoroughbred bloodstock to be born at the Queen’s Sandringham Estate.

The Queen kept her promise to the Mounties and presented Victoria as a gift to mark the country’s 150th anniversary.

The mare Elizabeth had a second foal, which was named Venus by the Queen’s granddaughter, Lady Louise Windsor.