The honeymoon was finally over on Monday as newly married Jennifer Lopez waved goodbye to Italy with one hand – while grabbing a handful of Ben Affleck’s backside with the other.

The couple have been enjoying a seemingly endless tour of the picturesque European country following their second marriage ceremony at Affleck’s sprawling Georgia bolthole on August 20.

Arriving at a private airstrip close to Lake Como, Lopez, 53, and her 50-year old husband appeared to be in high spirits while greeting staff and waving to onlookers before boarding a waiting jet.

Lopez looked typically stylish in a cream co-ord teamed with lightly tinted sunglasses as she greeted fans with a smile, while Affleck opted for a beige sports jacket and matching chinos.

Farewell: The honeymoon was finally over on Monday as newly married Jennifer Lopez and Ben Affleck waved goodbye to Italy and returned to the United States 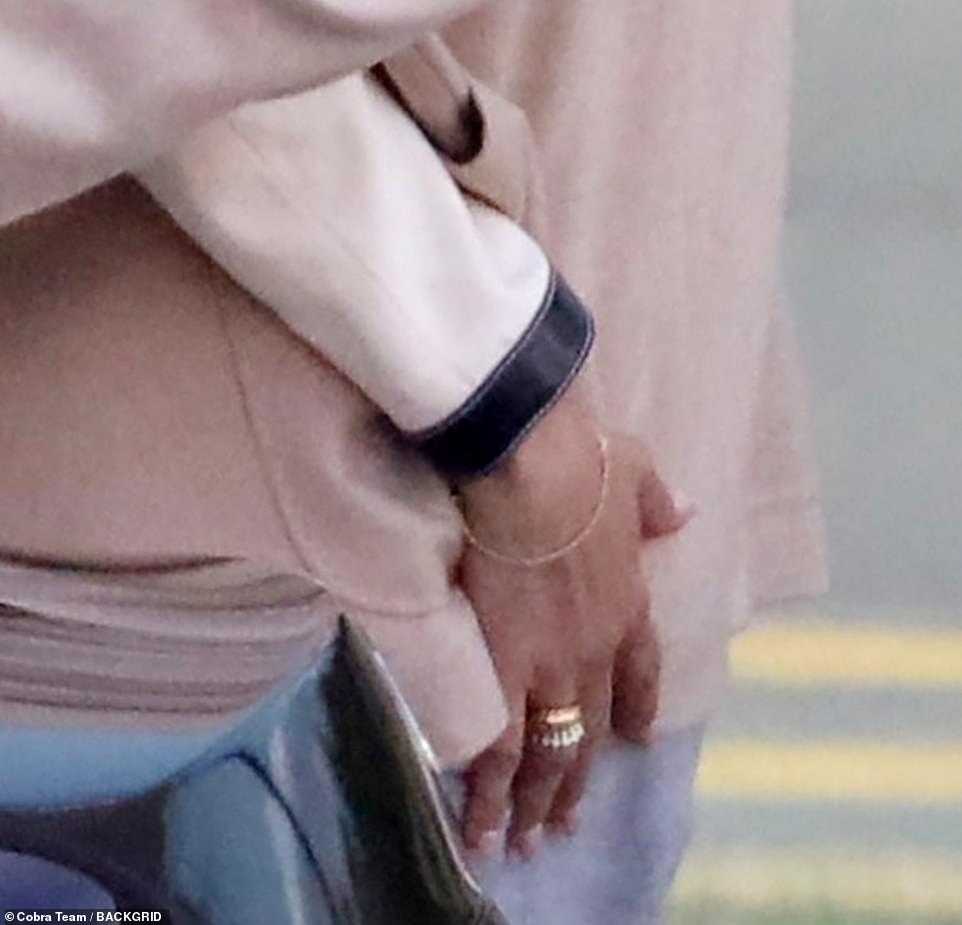 Rear we go: Lopez placed a hand on her husband’s bottom as they waited to board their plane on an airstrip in Lake Como

The couple were drawing a line under their second honeymoon in Italy after walking down the aisle, again, in a lavish Georgia wedding that followed an earlier marriage ceremony in Las Vegas on July 16.

There were 135 people at their ‘old Hollywood-themed’ wedding, HEKD within the ground’s of Affleck’s $8.9 plantation style mansion and originally revealed in pictures obtained by DailyMail.com.

The ceremony lasted 45 minutes and was officiated by Jay Shetty. It was held took place under the white metal framework of a church decorated with delphiniums from Jenevieve Peralta Floral Design and Tulips & Twigs.

The couple, playfully referred to as Bennifer, set out a massive white carpet with Lopez in a white Ralph Lauren couture gown complete with long train and veil, while Ben wore a black and white tuxedo. 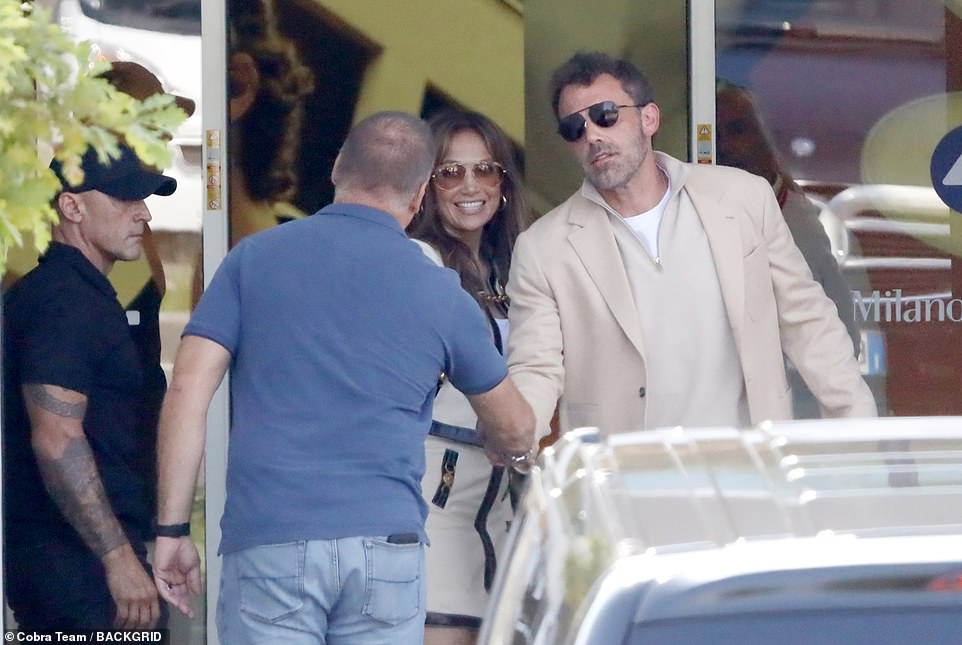 Greetings: Affleck was seen shaking hands with staff-members as they arrived at a private airstrip on Monday morning 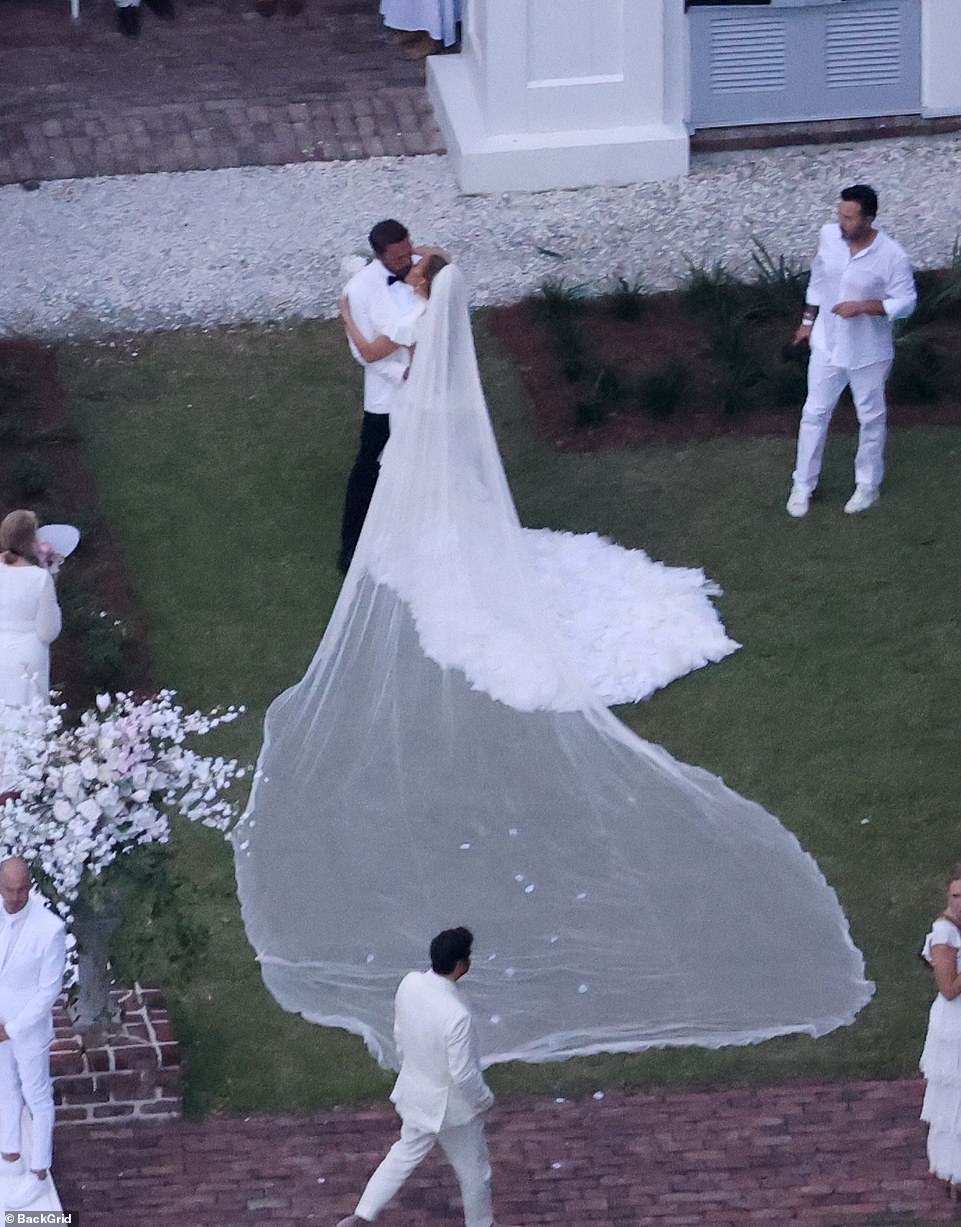 Happy ever after: The pair said ‘I do’ in a lavish wedding for family and friends at the Oscar winner’s home in Georgia on August 20 (pictured) 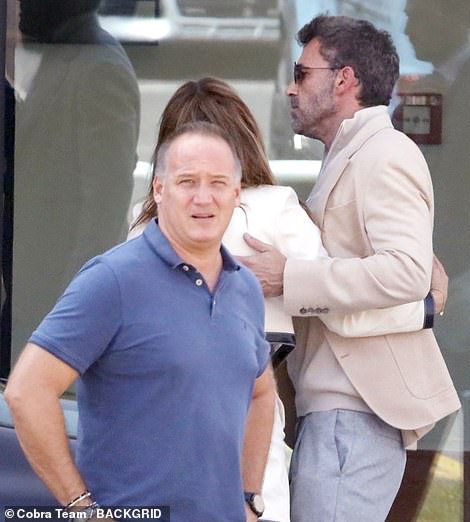 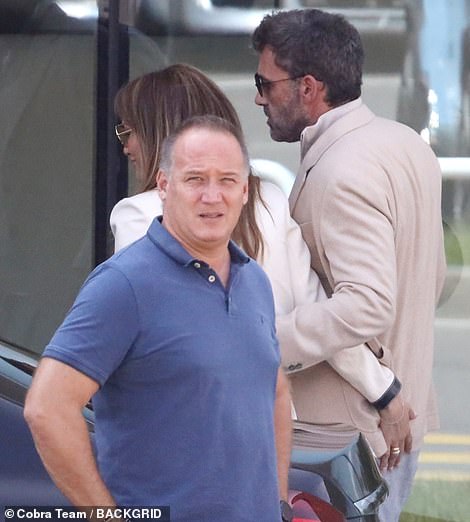 Tactile: The couple couldn’t keep their hands off each other while waiting close to the airstrip ahead of their flight back to the United States

Ciao Bennifer! Where DID Ben Affleck and Jennifer Lopez go during their wild week in Italy?

The couple were first spotted enjoying dinner at the lavish five star hotel, just three days after their second wedding in Georgia

The couple wasted no time visiting fashion capital Milan’s famous boutiques, and were soon surrounded by fans during a trip to designer Brunello Cucinelli’s store in the Italian city

Within 24-hours they were back in Lake Como, where they paid a visit to the area’s western shore, at the mouth of the river Senagra 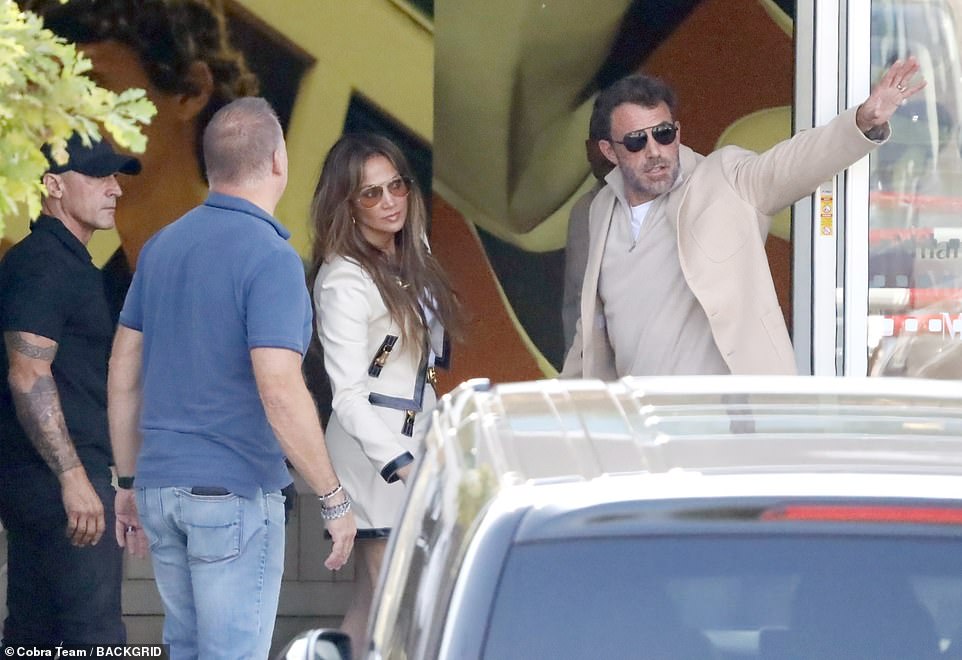 Bye for now: Affleck waved at onlookers as his wife looked on following their arrival at the private airstrip

Their wedding cake was from Minette Rushing Custom Cakes. The music was from DJ Dubz, and there were fireworks.

Photographs showed the pair hugging at a waterside jetty at the mansion, with the fireworks display from a lake in the property rounding off the main event.

The couple were followed down the aisle by close friends and family, including their children from Jennifer’s third husband Marc Anthony, as well as Affleck’s first wife Jennifer Garner.

Joining Affleck were his three kids from his marriage to Jennifer, Violet, 16, Seraphina, 13, and Sam, 11, while standing by Lopez were her twins, Emme and Max, 14, with Marc. All wore Ralph Lauren Couture. 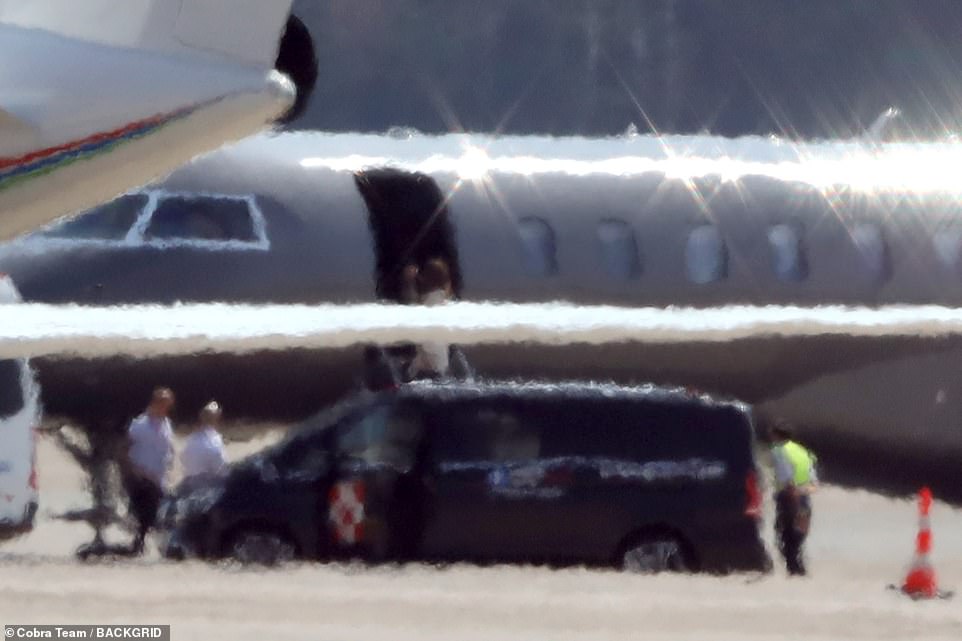 There it is: The couple’s gleaming private jet was pictured waiting on the tarmac ahead of its departure on Monday 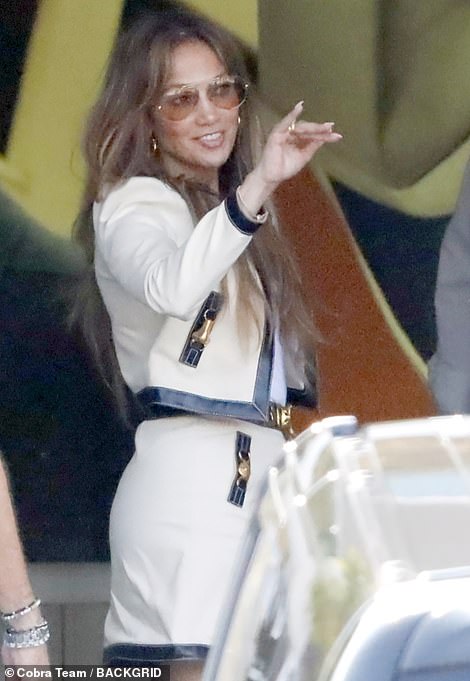 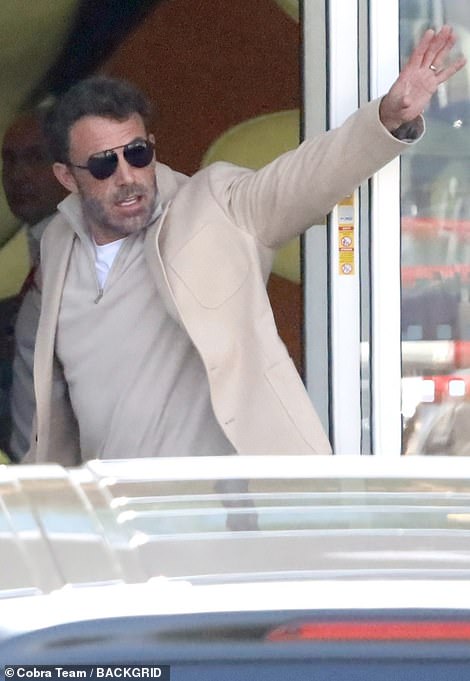 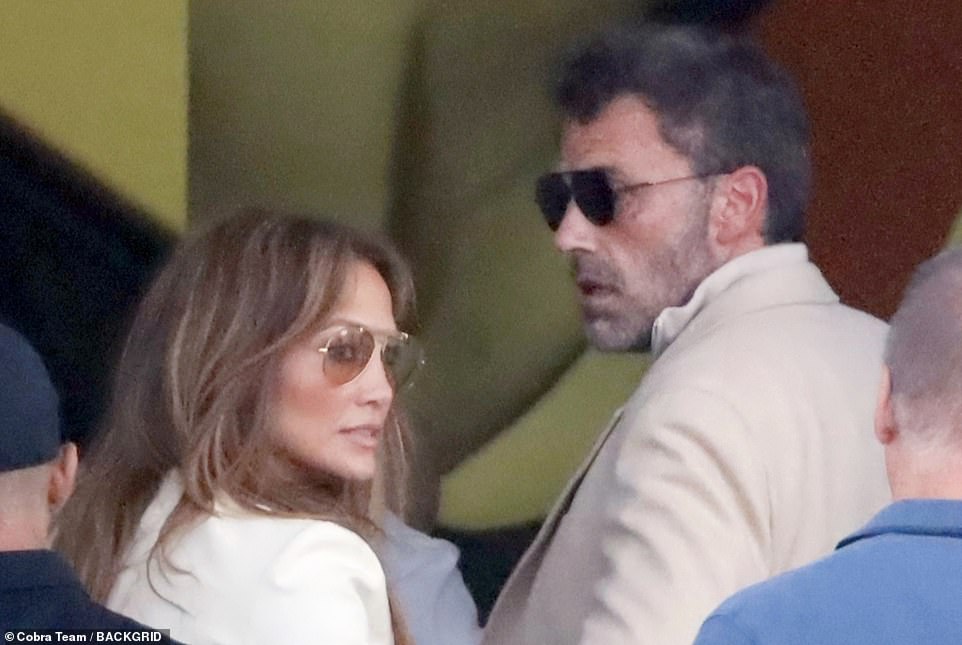 Let’s go: The couple looked back one last time before boarding their private jet and leaving Italy

A source told People: ‘She [Lopez] loved having all the kids there. She loved the location. It all felt very special. It was a dream for her. She keeps saying “my husband” and it’s very cute.’

Stylist Courtney Victor added: ‘They all seemed like such a happy and cohesive family unit. She is absolutely flawless. It’s unbelievable how beautiful she is.’

Matt Damon, long associated with Affleck and a co-Oscar winner with his fellow Massachusetts native for Good Will Hunting, was spotted at the scene with his wife, Luciana Barroso.

Director Kevin Smith and actor Jason Mewes – famous for their pairing as ‘Jay and Silent Bob’ – were also spotted in Georgia for the party. 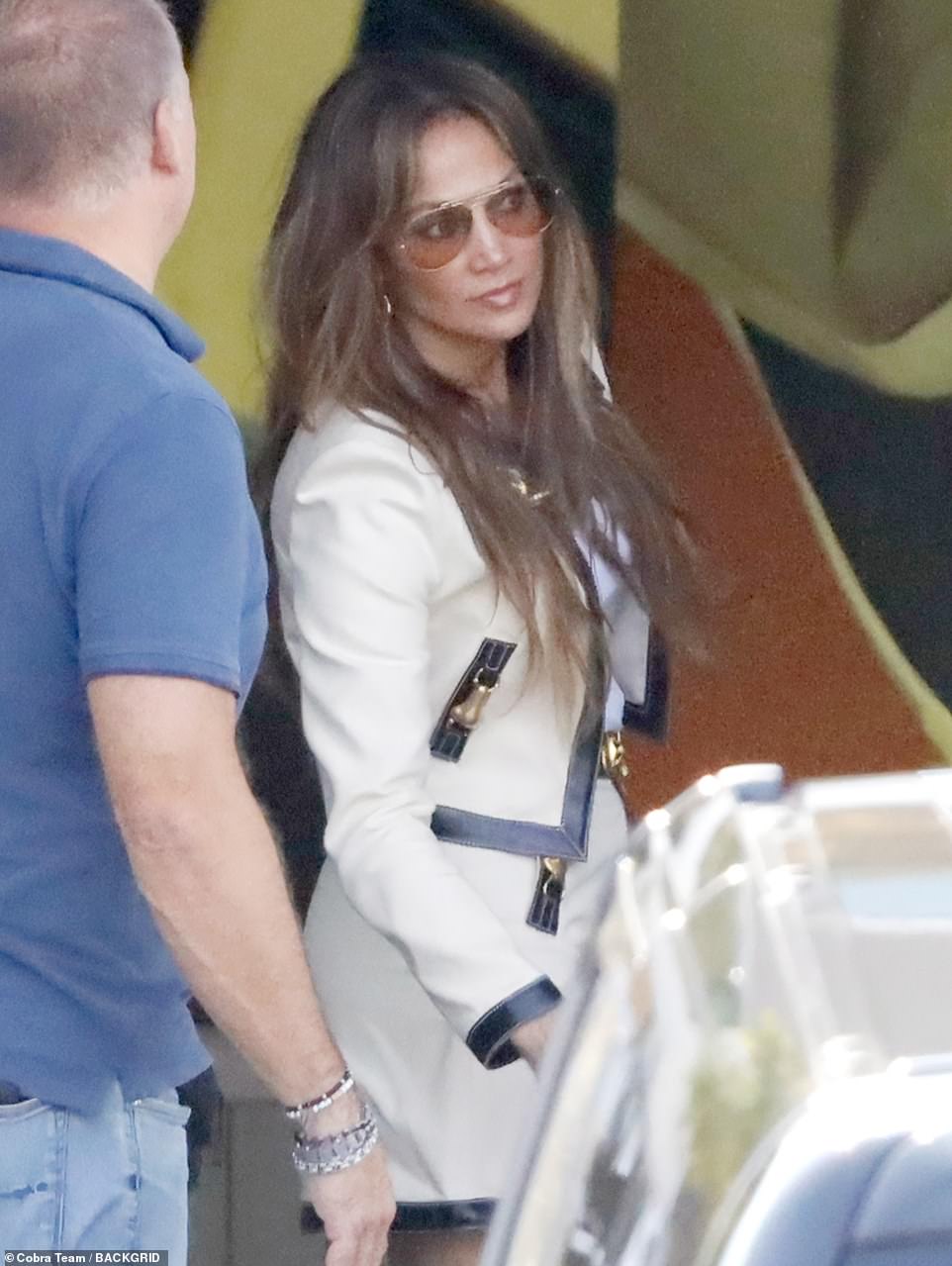 Shady: Lopez rounded off her latest look with a pair of lightly tinted Aviator sunglasses, while her hair was neatly styled with a simple center parting 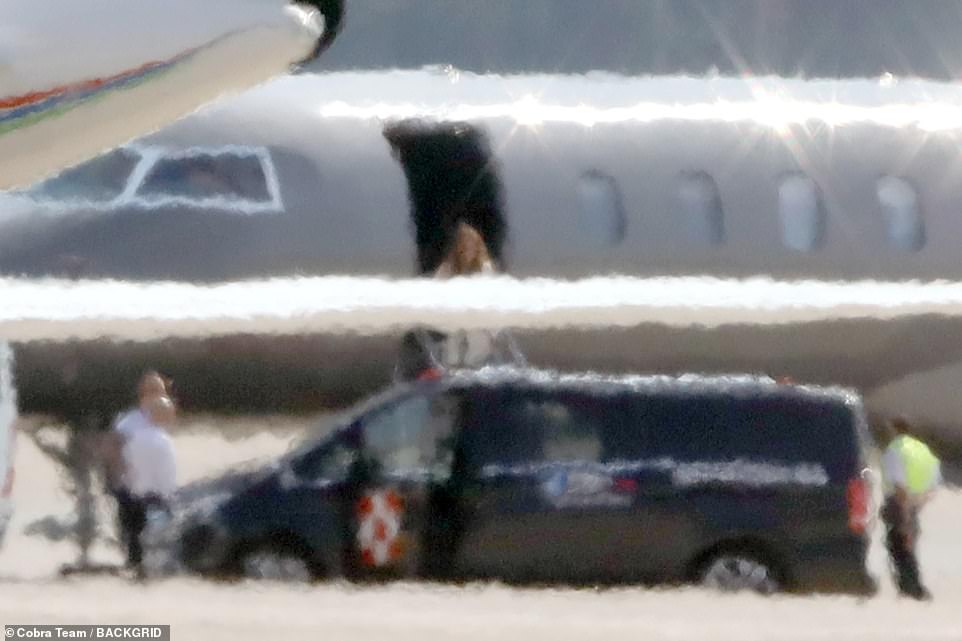 All aboard: She was later seen in the doorway of her private jet after climbing inside ahead of the long journey home

Affleck’s brother Casey, 47, declined to attend after saying he had prior family commitments in Los Angeles.

Also missing from the celebration was Affleck’s ex-wife, Jennifer Garner, who remains close friends with Affleck but could not attend due to scheduling conflicts as she is filming in Texas.

The new Mr and Mrs Affleck are living at a rental in Beverly Hills until the remodel on Lopez’s old Bel Air, California mansion is done.

Ahead of their Georgia wedding, the couple eloped in Las Vegas on July 17 before taking their children to Paris for their first honeymoon.

Their reunion comes 20 years after they first dated and got engaged, only to call-off their wedding in fall 2003, blaming excessive media attention for the cancelation. 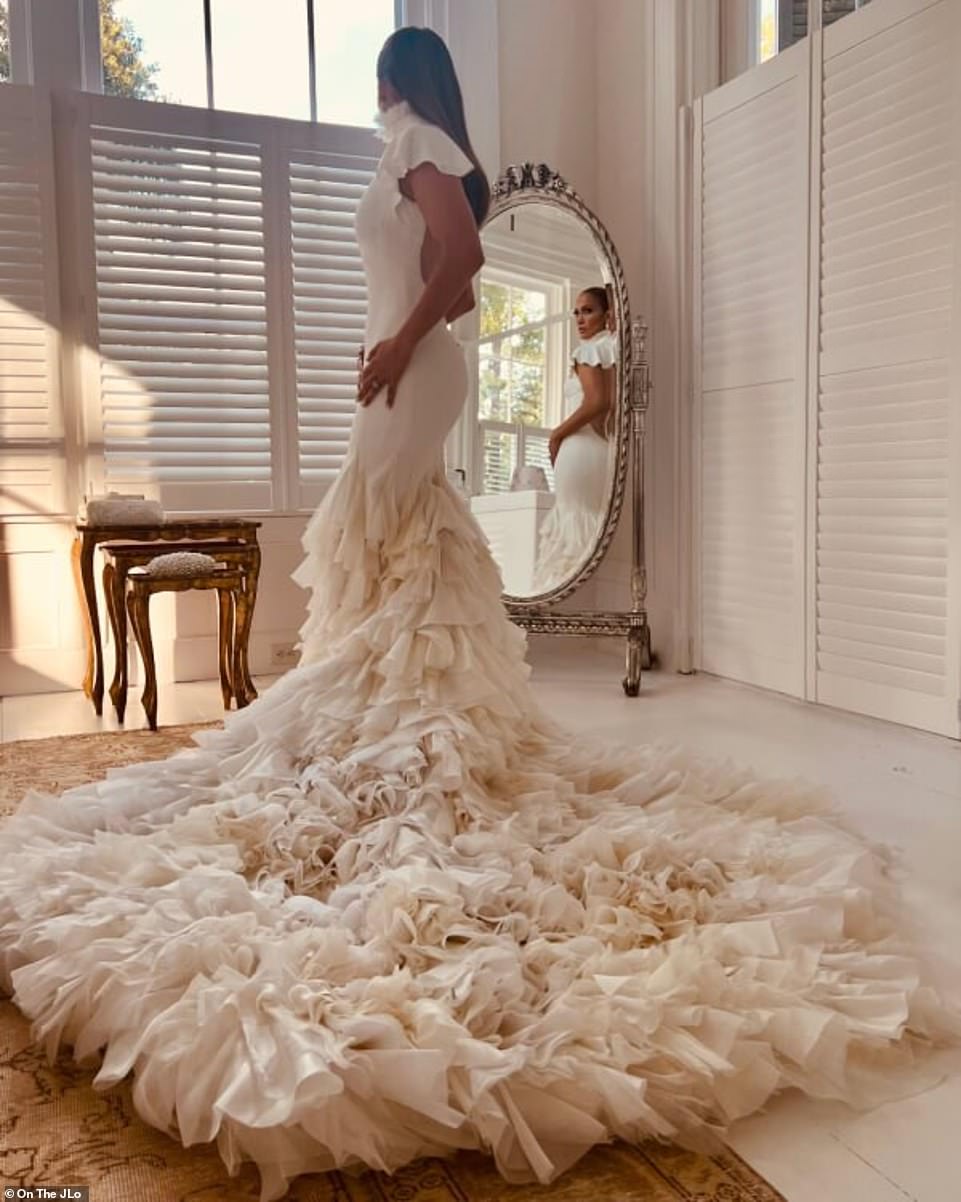 Wedding splash! Prior to her second wedding Lopez shared a look at her stunning wedding in a photo of the star wearing a custom-made Ralph Lauren couture gown; the images were taken by John Russo 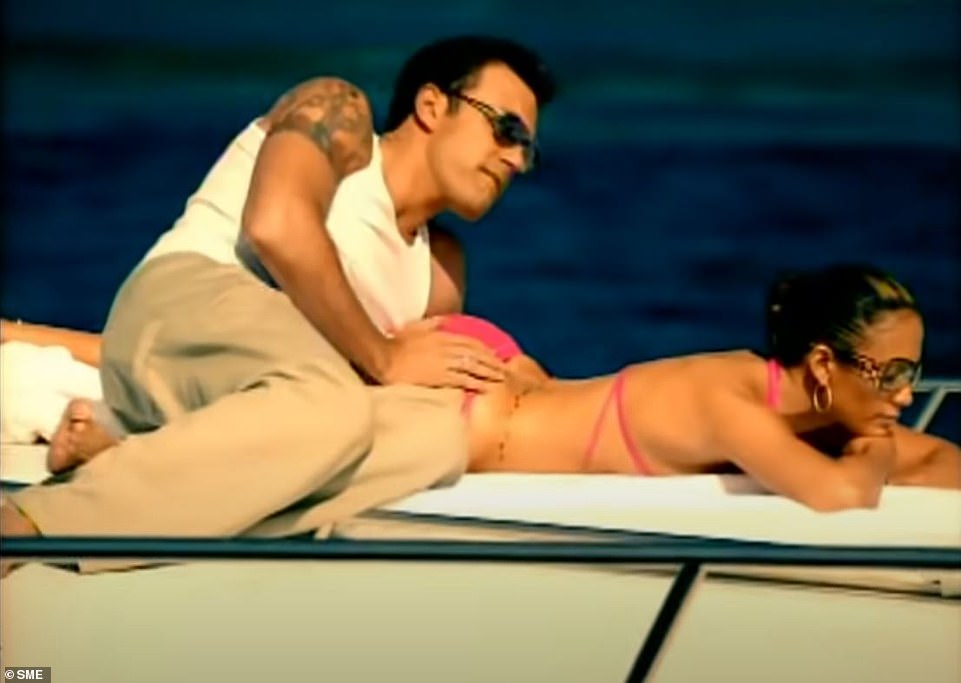 Iconic video: Affleck famously starred in her music video ‘Jenny from the Block’ in 2002, where he famously smacked her pink bikini-clad behind as they lounged on a yacht 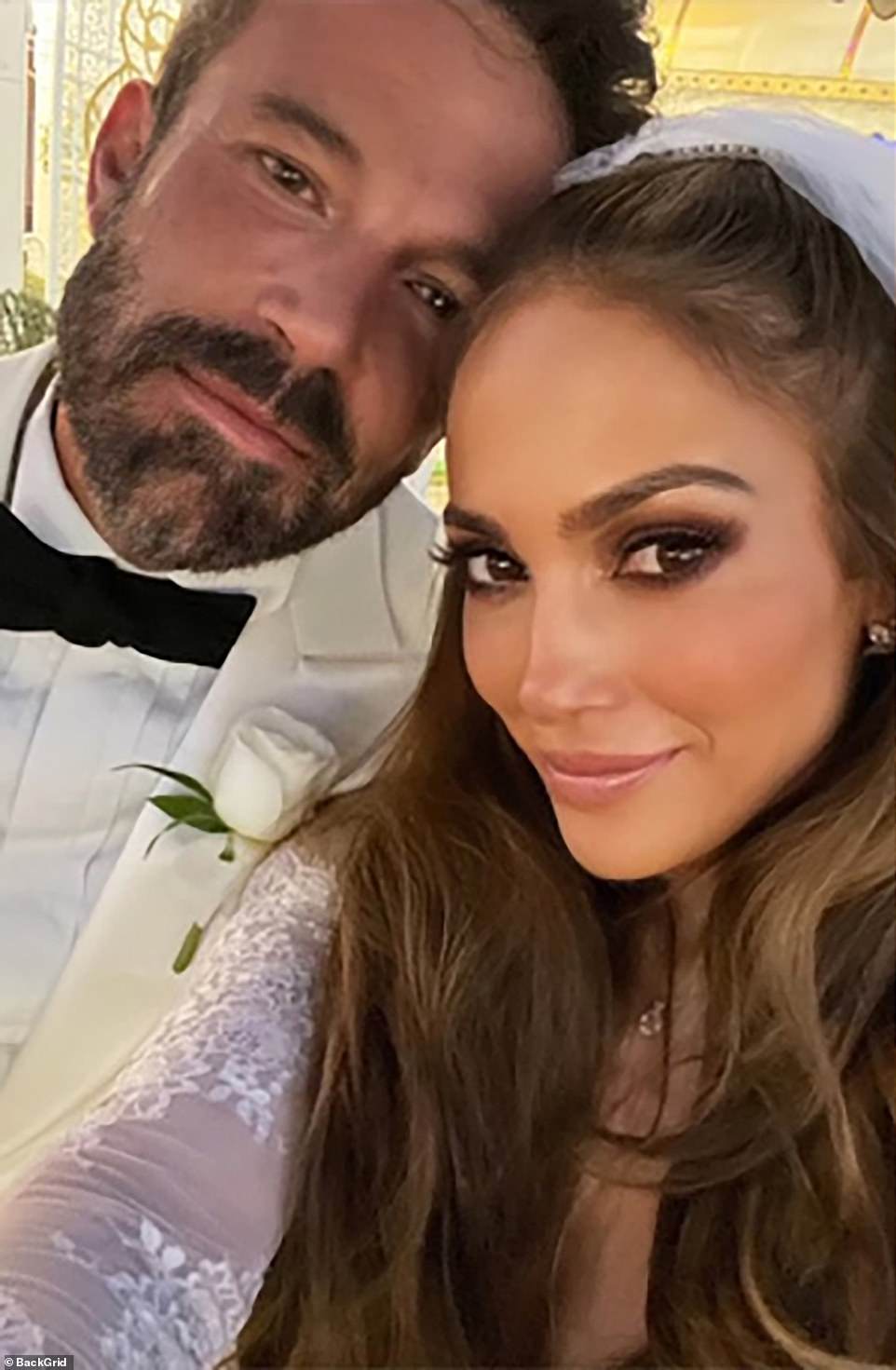 Vegas wedding: Ahead of their Georgia wedding, the couple eloped in Las Vegas on July 17. The pair’s happy reunion comes 20 years after they first dated and got engaged, only to call-off their wedding in fall 2003, blaming excessive media attention