A among Konami’s recent (if sporadic) revival of Silent Hill As a brand, there has been an absence of the games themselves. Skateboards, toys, sweaters, lots of merchandise in general, but thus far the only game-related content we’ve gotten (besides guest characters appearing in other franchises) was the re-release of Silent Hill 4: The Room on GOG back in 2020. Whether or not you believe the rumors regarding new titles being on the wayit’s safe to say that a lot of Silent Hill fans would probably really appreciate being able to play the games on something newer than a PlayStation 2 at the very least. Well, if a recent Instagram post from Konami’s Official Shop account is to be taken at face value, it seems we’re about to get just that.

Earlier today, they made a post announcing the upcoming release of 23 “classic” and “new” games (along with 18 DLCs for those games) coming to Steam as digital downloads for the “very first time”. There’s a very brief trailer showcasing a handful of games, such as Metal Gear Rising: Revengance, Super Castlevania 4and Castlevania: Lords of Shadow (among others), however the teaser doesn’t depict all of the games they appear to be announcing; in amongst the included hashtags for the post, there are other titles such as TMNTbut most importantly: Silent Hill. 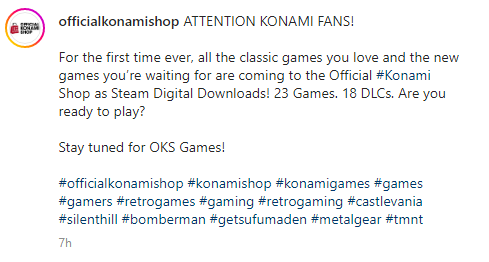 There’s no other information at the moment, including release dates for any of these upcoming games, but the inclusion of Silent Hill is both surprising and mouth-watering. Of course, there are also a lot of questions regarding these potential releases such as which games will they be, what versions will they be, and so on. Silent Hill 4‘s GOG release made a few quality of life improvements for modern hardware (although other issues have been reported), so if they chose to port titles like Silent Hill 2 and 3they follow suit with new tweaks to help them run better with modern hardware and take advantage of modern screens and aspect ratios.

We’ll keep you updated as more information becomes available. Here’s hoping for the best… but it is Konami we’re talking about.