The landscape of the Mario Kart series looks very different today than it did back in 1992 when Super Mario Kart was released for the Super NES. Of course, there is a clear improvement with respect to visuals and we now have new characters, karts, and courses dropping all the time thanks to the Mario Kart 8 Deluxe Booster Course Pass releases and Mario Kart Tour on mobile. Yes, there’s now an official Mario Kart game on non-Nintendo hardware — what a world we live in! However, at its heart, Nintendo’s top racing franchise is today very much the same game that it was 30 years ago.

Across the titles in the Mario Kart series, each entry has had to work, naturally, within the technical boundaries of its respective console. As with any video game, the development of new ideas is a balancing act between what new hardware can bring to the table — be it two or four-person multiplayer, fully 3D character models, online multiplayer, AR racing, the list goes on — versus the realities and restrictions of that hardware. No more so was this the case than in the franchise-opening SNES title, which managed to spin a positive from a hardware limitation by introducing a mechanic which would go on to define the franchise’s style of racing: the humble drift. 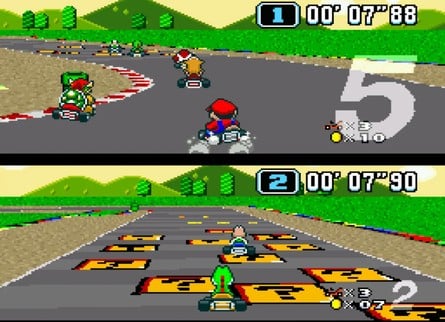 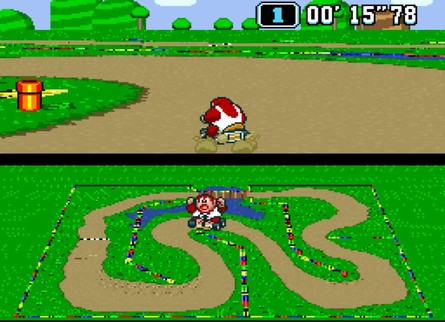 The first entry in the Mario Kart series was originally intended to be a multiplayer F-Zero sequel. “We didn’t at all have the concept of a racing game with Mario, we began with experiments for a multiplayer F-Zero game,” Super Mario Kart co-director, Hideki Konno, stated in a SNES anniversary interview coinciding with the launch of the Super NES Classic Mini. Headed up by Konno and co-director Tadashi Sugiyama, with Shigeru Miyamoto producing and assigning the directors their task, this two-player racing project was intended to cash in on the success of the futuristic launch title, making the most of a rapidly booming culture of couch co-op gameplay.

Miyamoto was right, with its two controllers the SNES was surely the rightful home of an F-Zero multiplayer racer; However, running the game’s signature expansive straight-line tracks in the required split-screen mode was too much for the 16-bit hardware. The tracks needed to be smaller and – to provide a greater sense of distance traveled – have more hairpin turns. The team emphasized the need for track cornering in the following exchange between Konno and Sugiyama:

With the exception of some outliers (*cough* ‘Excitebike Arena’ *cough* ‘Baby Park’), long straights aren’t typically a feature of most Mario Kart tracks; courses are defined by how you handle the sharp corners without ending up on the grass or flying off into space.

The SNES hardware limitations were not, however, a hindrance for the Super Mario Kart team — at least not once the designers donned their thinking caps. Turning these tricky, necessarily sharp turns into a joyful part of the game experience was something that needed to be addressed, and thus, the drift mechanic was born.

Before the addition of Drift Boost, this ‘gliding’ function in Super Mario Kart was simply there to maintain momentum and ensure that the tracks’ turns weren’t a detriment to your enjoyment. If it wasn’t for the introduction of this cornering assist, the small and winding tracks would have been near-impossible to navigate at the karts’ top speeds.

The introduction of drifting was borne of necessity, then, but this method of combatting hardware restrictions has, as any regular Mario Kart player will tell you, grown to become a key element to driving a successful race. The mechanic was upgraded for Mario Kart 64 to add in the boost function – actively rewarding you for extending your drift – and this has since been implemented in every subsequent entry. 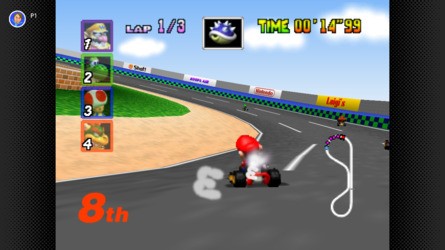 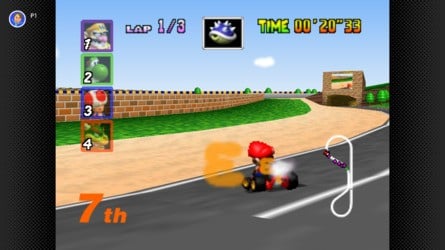 While the later additions to the franchise would have no technical issues with making the courses longer and straighter — and we got a sublime multiplayer F-Zero way back in 1998 — that initial limitation has gone on to define the series’ style of play and how Mario and co. negotiate tight bends. Super Mario Kart is referenced near-obsessively throughout its sequels, from remastered tracks to the return of the Super NES’ balloon-popping battle mode, but the humble drift can perhaps be seen as the biggest callback of all. Drifting, and drift boosting, is an intrinsic element of what makes a Mario Kart game feel like one of the family.

And here we are 30 years on, with fans and commentators eyeing the ageing Switch and wondering what innovations a potential (and inevitable) ‘Mario Kart 9’ might bring, while Nintendo serves up nostalgia in DLC circuit form. Perhaps a generational leap is needed before Mario Kart can evolve. Super Mario Kart’s introduction of drifting is a testament to the fact that the best designers work with system limitations, though. Ironically, the hardware issues that initially prevented the creation of an expansive multiplayer racer spawned one of Nintendo’s most enduringly popular franchises.

Ultimately, the team was faced with a problem and, luckily, they let it slide.

What are your fondest memories of Super Mario Kart? Glide on down to the comments and let us know!