Promotions on products are hardly new, especially in the fitness landscape – and especially over the past 6-8 months as some companies have struggled with a glut of inventory. But the promotion that Whoop sent out to members over the last few days is notably different, and worthy of a quick post.

As a quick reminder, Whoop is both hardware and software (here’s my full Whoop 4.0 In-Depth Review). Essentially you’ve got a small pod that’s got an optical heart sensor in it, and some accelerometer/gyro bits, which connects to your phone via Bluetooth. There’s no screen on a Whoop device, instead, you rely on the phone app. That app in turn shows data in roughly two buckets: Strain and Recovery. Strain is essentially their word for anytime your heart rate is high, normally for a workout. Whereas Recovery is their umbrella for sleep. Within that, sleep also includes things like resting heart rate, heart rate variability, and more.

However, unlike some devices where you pay for the hardware and get the platform for free, Whoop is the opposite. You pay a subscription fee and then get the hardware for free (including any new versions that come out). It starts at $30/month if bought monthly, but gets down to about $20/month if you buy a 24 month package. For better or worse, that’s their scheme. I’m not sure if that scheme is sustainable long-term if new entrants jump in with hardware-only costs (ala Apple/Garmin), but in the short to medium term, it’s clearly quite successful for the company.

With all that backstory, the new promotion basically lets you suffer to earn a discount on your membership renewal fee. For this week (from today, August 29th till next Sunday, September 4th), Whoop will take your highest ‘strain’ day score, and match its discount. Your Strain score is a score that goes from 0 (not really) to 21 (probably but rather hard). For most people, your daily strain score will probably sit between 12 and 18. Here are two random weeks to show a high week (hiking the Tour du Mont Blanc): 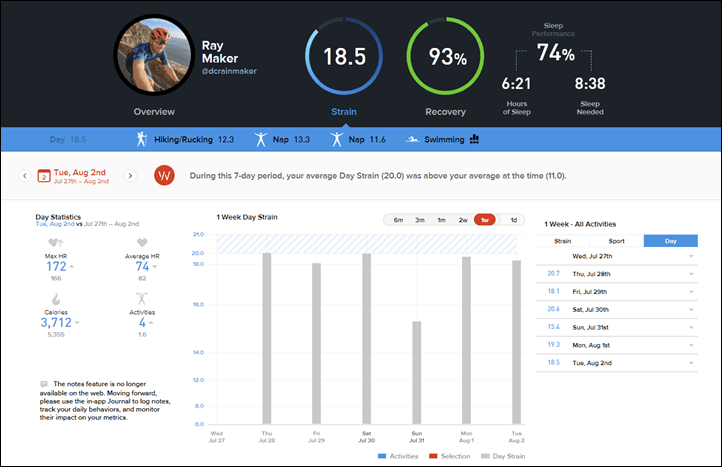 And a somewhat more normal week:

The Stain score is a weird concept because it tops out at 21 and isn’t linear. It’s beyond trying to explain here, and is one of the few remaining things about Whoop that just isn’t super awesome (namely, because you can’t easily compare days without doing logarithmic math, which is silly when all other traditional training load metrics out there are simply cumulative as much load as you want). In other words, there’s a massive difference between 19 and 20.5, but a relatively trivial difference between 9 and 11

But, my annoyances aside – I do actually like their promo. I think it’s brilliant. And for three different but notable reasons:

First, From an athletic standpoint, it encourages people to do more workouts, and specifically longer/harder workouts. In general, that’s a good thing. Sure, some people may be recovering from UTMB this past weekend, or busy in life, or what-not. As always, you can’t cover every last scenario.

Second, From an app usage perspective, it not only encourages people to use the app more, but specifically the way the way the promotion is setup you have to join a team. For many (myself included), I’ve never had reason to join a team. Thus, this piece is new to me. It exposes people to more of the community aspects (even if I will probably leave said team a week from now).

Third, and lastly, it’s a smart business move. You’re sent a discount code, which is applicable for 6/12/24 month memberships. So Whoop is locking in that money upfront, before someone changes their mind down the road. Note that I don’t yet see conditions for how soon you have to use your coupon code (they say they’ll send it by September 7th though). But I presume it’s earlier rather than later.

I can’t remember seeing anything quite like this in some time, from any company. Certainly, there have been promotions over the years where if you do a set amount of days you can earn a discount on a service, but I don’t remember it being tied to a specific high intensity workout value. Further, most (all?) of Whoop’s more general-purpose discount codes only apply to new members, not existing ones.

Anyways, with that, I’m off to do a track workout. I’ve got no idea yet whether it’ll be enough to cash in a meaningful discount. I could use the strain coach option in the app and keep running till I hit the value I set, but in this case, I’m just gonna do what I have planned.